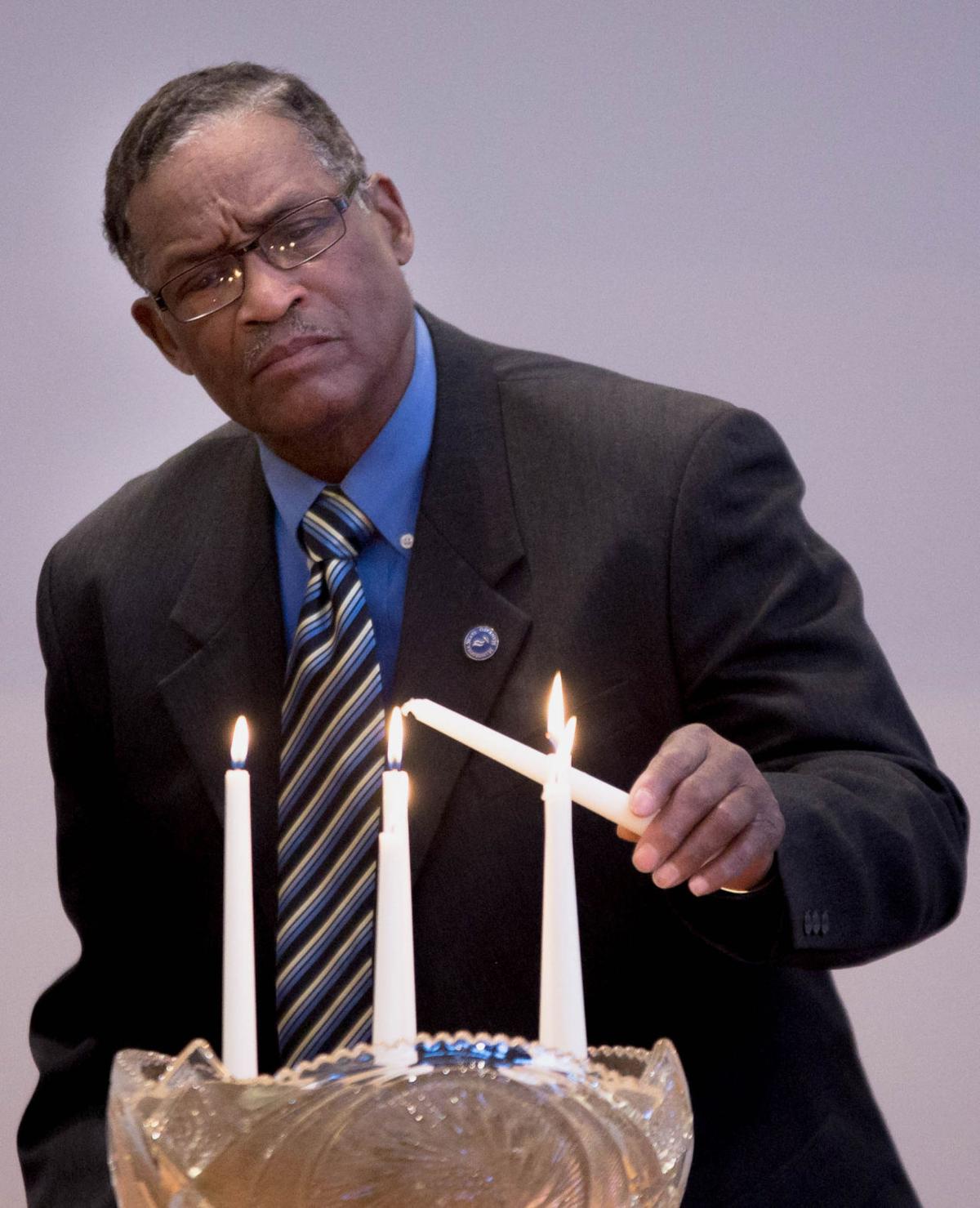 Michael Fagin, a retired Minnesota State University professor, lights the candles of reflections before speaking Sunday at the First Congregational United Church of Christ in Mankato. Photo by Trevor Cokley 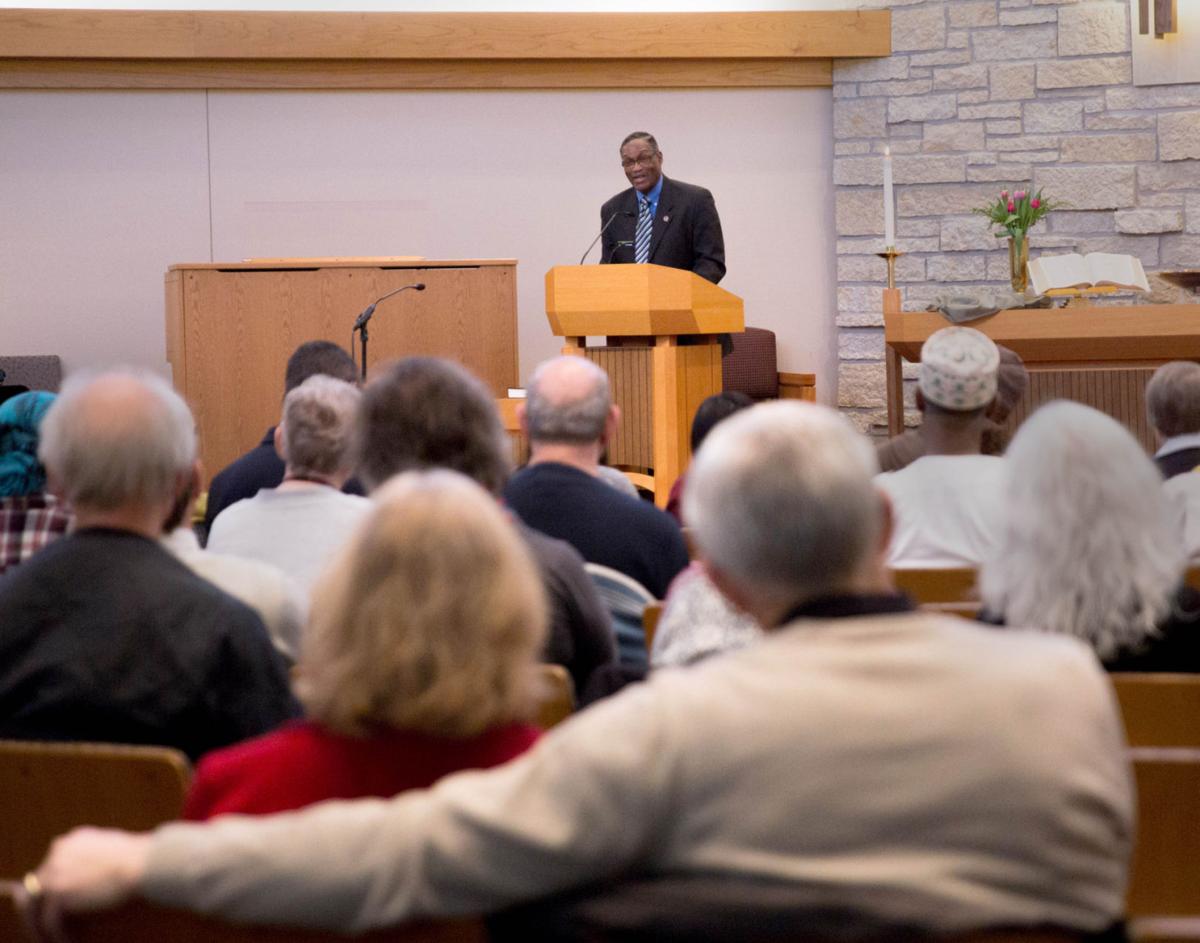 Michael Fagin, a retired Minnesota State University professor, speaks in front of a diverse congregation about Martin Luther King Jr. and the movement for equality Sunday at the First Congregational United Church of Christ in Mankato. Photo by Trevor Cokley
For all the progress we've achieved in assuring civil rights for all, there is still work to be done.
That was one of the themes behind an area interfaith celebration of Martin Luther King Jr. on Sunday at First Congregational United Church of Christ, a day before the famous Civil Rights Movement leader's national holiday.
More than 100 people attended the event, organized by seven area churches — Bethlehem Lutheran Church, Unitarian Universalist Fellowship of Mankato, First Presbyterian Church, Centenary United Methodist Church, First Congregational United Church of Christ, Grace Lutheran Church, and the School Sisters of Notre Dame — and the Mankato Islamic Center.
"To be a part of this interfaith celebration is warming to my heart," said Michael Fagin, a retired professor at Minnesota State University. "And I hope that it will be warming to all of you."
Fagin was one of several speakers who reflected on King's words, as well as the struggle for racial and religious equality in the U.S. over the past few decades.
The former professor marched in several protests during the 1960s and 1970s, including in a protest in New Orleans where King and other civil rights leaders also participated. He thought his protest days were behind him until the late 1980s, when someone put a burning cross on a Kasota, Minnesota family's lawn because they were an interracial couple.
Fagin marched with his daughter and a group of people from St. Peter, Minnesota, to Kasota, "demonstrating to that community that there was support for equality, justice and freedom, and to rid ourselves of the evils of those that felt it was the right thing to do to burn the cross."
Not every black person shares the same sort of experiences that Fagin did, however. Mankato Area Public Schools Board Member Abdi Sabrie may have been born in another country, but the U.S. immigrant-turned-citizen has dealt with his share of latent racism as well.
Sabrie recalled how he tried to buy fruit from a market in a white neighborhood in Atlanta, Georgia, in 1984 only to be turned away.
"They told me they wouldn't sell to me because I was black," he said.
He also recalled the time a restaurant owner told a police officer in Washington, D.C. to remove a homeless white person, only to find the officer tried to remove Sabrie instead.
Sabrie has become an advocate for immigrants and refugees over the years, something he said was made possible because of the Civil Rights Movement.
"I wouldn't be here without the struggle and work of civil rights leaders like Dr. Martin Luther King," he said.
Today, advocates for various civil rights causes are struggling with similar issues. The Black Lives Matter movement emerged over the past few years in response to perceived issues between police and black residents in various communities, as well as several fatal shootings of black people committed by white officers.
Demonstrations and marches have taken place all across the country, including in Minneapolis in November after police shot and killed 24-year-old Jamar Clark during a domestic violence call.
Renita Robinson, the executive director of the Community Against Domestic Abuse, shared her experience speaking with her youngest son, who had been pulled over by police several months ago.
Robinson's son told her he had a taillight out, was speeding, and probably had one too many to drink the night he was pulled over.
Her son said he feared for his life once the officer raised his voice, shouted at him to stop escalating the situation and called for backup. Several officers arrived but wouldn't come closer for fear of making things worse.
Robinson said her son had to force himself to calm down after a tense situation, lest he find himself shot by police.
"'I remember all the things that we talked about, and all of the things that have been going on in the news,' he said, ' and I realized it was true.'" Robinson told the audience.
Despite the issues, many people are trying to follow in King's and other leaders' footsteps.
Jaylani Hussein became the executive director of the Minnesota chapter of the Council on American-Islamic Relations in 2015, during a year where presidential candidate Donald Trump called for a ban on all Muslims entering the U.S., among other issues.
"My first year just came to a conclusion, and I must say, uff-da," Hussein said.
Yet Hussein also called on people to spread peace among themselves and others, and to be more thoughtful when it comes to racial or religious struggles.
"Really, civil rights is about all of us," he said.
The message seems to be working. Myra Vugteveen called the event "eye-opening" as she didn't realize people still faced that sort of discrimination.
"[The event] was wonderful," she said.
We have recently upgraded our commenting system. If you wish to comment please login using your social ID or create a new account.
0 comments